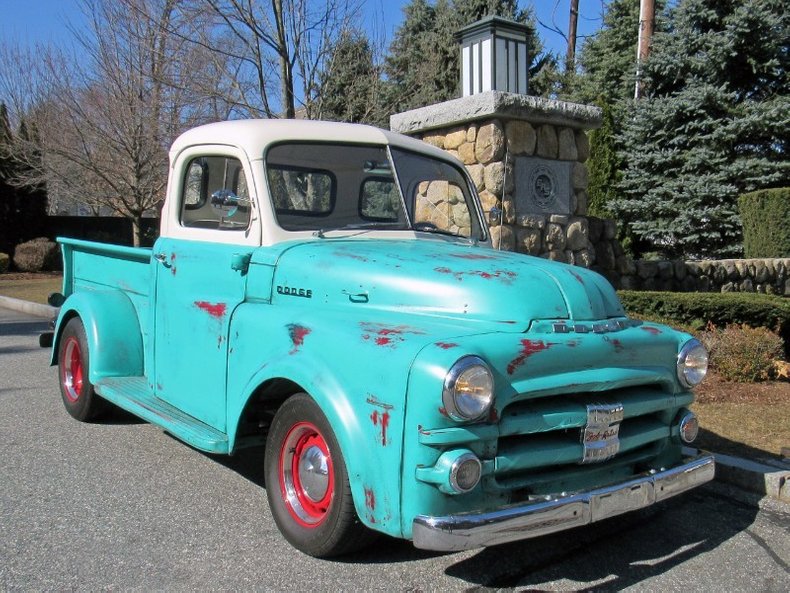 5 Window Hemi Resto-Mod, Frame Off Restoration
1952 Dodge B3-B Pilot House Pick Up Truck featured in Patinaed Teal Green/White Roof with Red Interior. The drivetrain features a rebuilt 1957 Chrysler 392 Hemi (professionally rebuilt by 'Hemi Bob' of Colorado), backed by a GM 700 R4 Overdrive Transmission with a rebuilt Ford 9" Rear End. Front end is from a Mustang II with Tubular A Arms and Front Power Disc Brakes. The engine was shifted forward and the front axle was moved back slightly on the frame for better weight distribution. The Red Wheels with Chrome Centers are from "Artillery" and feature new BF Goodrich Radial T/As 8X15 in the rear and 7X15 in the front. The interior is all new and features a Flaming River Tilt Steering Column. The vehicle has been driven less than 150 miles since the full frame off restoration. The Dodge B Series Trucks featured the high visibility "pilot-house" cab with optional rear quarter windows which are featured on this truck. This one of a kind, turn key, "Job-Rated" truck has it all: the power, the look, the dependability, and the performance drivability!
You could not build one or restore one at this price.