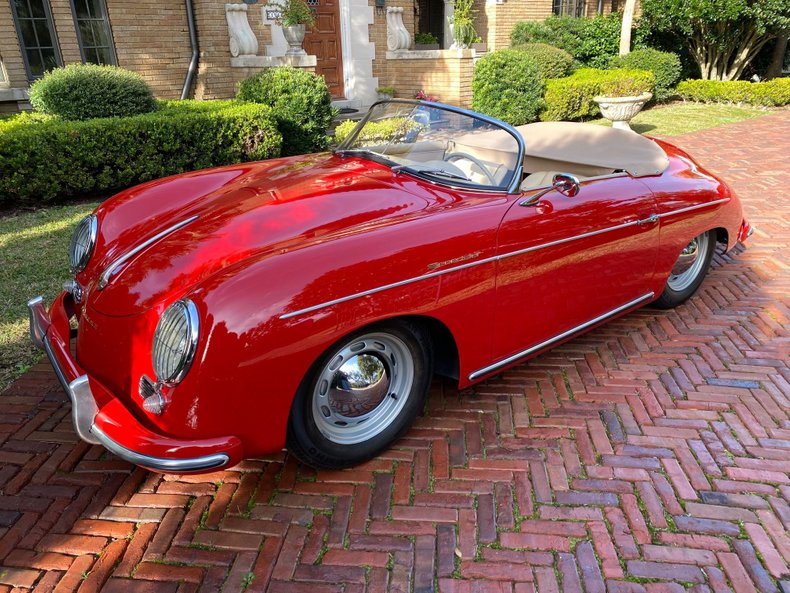 This beautiful 356 Speedster left the factory on November 30,1955 finished in Signal Red over a beige leatherette interior. The car was kept in dry storage from 1973 until 2010 when a bare-metal restoration was completed by Klasse 356 of Allentown, Pennsylvania, at which time the car was refinished in its original color of Signal Red (6211). The chrome door handles were refinished along with the round bezels of the early “beehive” style taillights. The tan soft top and removable side curtains were made more recently by Autobahn Interiors of San Diego, California. The interior comes trimmed in beige leather with red seat piping, tan square weave carpeting, an ivory-colored two-spoke steering wheel, a black rubber floor liner, and a suite of analog VDO instrumentation rebuilt by North Hollywood Speedometer including a Störk oil temperature gauge. In 2015 the original engine was replaced with a Porsche 912 engine which was rebuilt and upgraded with a 1,720cc big bore kit by Bob Fox of Ambler, Pennsylvania. The rear wheels are driven by way of a 4-speed manual gearbox. Koni shocks absorbers are equipped as well as an upgraded Porsche 911 ZF steering box, Porsche 911 dual-circuit brake master cylinder, 911 wheel cylinders, and steel brake lines. About 1,000 miles have been driven since the installation of the rebuilt engine. Additional features include H4 headlights with chrome stone guards and 15” wide-five steel wheels with chrome hubcaps and Kumho Power Star 758 Radial tires sized 165/80.

Accompanied by a Porsche Certificate of Authenticity, toolkit, and owner's manuals.

This Signal Red 356 Speedster runs and drives as good as it looks and would make a wonderful addition to any collection.