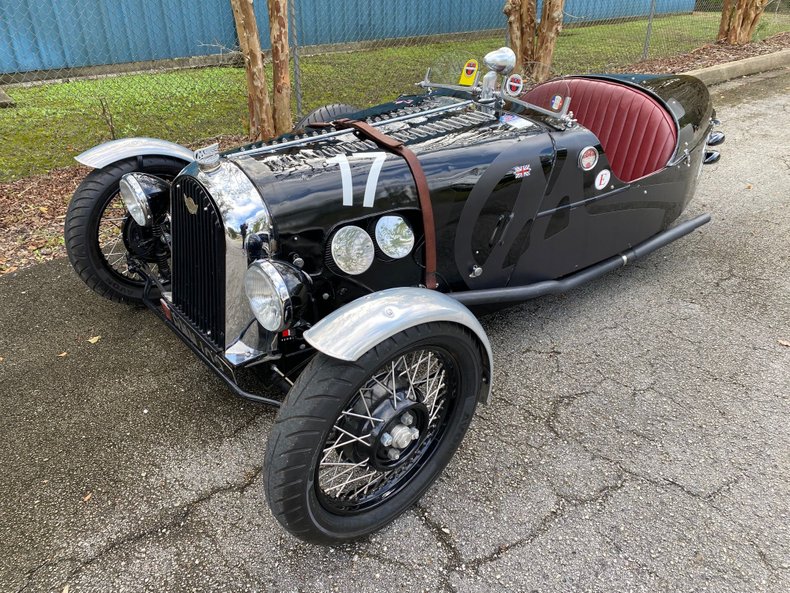 Get Financing
$551 /year insurance
Drive this for

One of 129 three-wheelers built between World War II and the end of factory production in 1952.

This 1950 Morgan F Sport Super is said to have been raced in Europe while based in England, including with a previous owner of 37 years, before being refurbished in 2010. The 1,172cc Ford 109E inline-four has been updated with twin SU carburetors, an electric water pump and cooling fan, an alternator, and a spin-on oil filter with rerouted lines. Service under current ownership included replacement of the fuel pump, filter, hoses, and clamps as well as adjustment of the carburetors and ignition timing. The car was imported to the US by a Florida collector in 2011, and participated in the Put-in-Bay Road Race Reunion in August 2013. Features include aluminum fenders, wire wheels, Brooklands windscreens, a spare wheel, twin SU carburetors, an electric water pump, a lightened flywheel, Simpson lap belts and a British tax disc. Self-adjusting front drum brakes and the single rear drum are actuated by a Tilton master cylinder. The center tie rod, ball joints, fuel pump, and battery have been recently replaced, along with adjustment of the carburetors and ignition. This Sport Super is offered with service records and historical documentation.

H F S Morgan's first three-wheeler of 1910 coincided with an upsurge of interest in cyclecars. Of simple construction with front-mounted motorcycle engine and two-speed chain transmission, the Morgan was light, fast and economical to run. V-twin engines from a wide variety of manufacturers were employed, including Blackburne, MAG and British Anzani, though those from J A Prestwich predominated.

Its superior power-to-weight ratio enabled Morgan's humble, three-wheeled cyclecar to outperform many a larger-engined four-wheeler, and its maker was not slow to capitalise on his creation's competition potential. A Gold Medal in the 1911 London-Exeter-London Reliability Trial with Morgan himself driving was followed by victory in the inaugural cyclecar race at Brooklands the following year, Harry Martin taking the chequered flag three minutes ahead of the field.

Racetrack successes undoubtedly encouraged Morgan sales but by the early 1930s increasing competition from cheap light cars prompted the introduction of more refined version - the F4 -powered by the 8hp Ford Model Y's 933cc four-cylinder engine. For the F4 the v-twins' traditional tubular chassis was abandoned and in its place was a pressed-steel, channel-section frame with the customary sliding-pillar independent suspension at the front. The four-seat F4 was soon joined by the two-seat F2 and towards the end of the 1930s Ford's 10hp 1,172cc engine became available, this more powerful unit being used for the F Super Sports two-seater. Boasting a new short-wheelbase chassis equipped with Girling mechanical brakes, the F2 Super Sports was good for more than 70mph and could cruise comfortably at 65. Renamed 'F Super' it continued after WW2, the last examples being made in 1952.