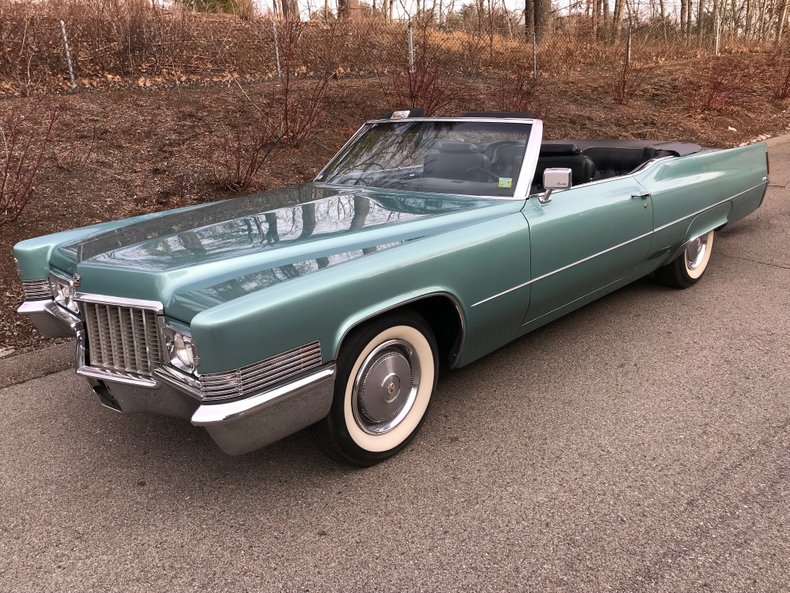 Gus De Gazio ordered this DeVille Convertible—the only droptop Caddy available in '70—from Brennan's Cadillac in Mt. Vernon, New York and took delivery on May 6, 1970, just in time to enjoy the summer weather. Finished in Adriatic Turquoise over black leather and black top, it was one of 15,172 DeVille convertibles produced, less than 10% of the total production.

A faithful motoring companion, Gus used his Cadillac as a fair weather driver, often using it to fetch parts for his DeSoto. Sparingly used and regularly maintained, it shows just a hair over 69,000 miles from new.

The DeVille debuted in 1958 as a new moniker for the Series 62, slotting just below the range-topping Eldorado. Carrying with it the famed Harley Earl styling of that era, it had big fins, aeronautic-inspired styling details, and plenty of chrome. The second generation of DeVilles released in 1961 gave way to a less rounded shape before the creased figures of the third generation penned by the Art & Colour Department now run by Bill Mitchell were unleashed in 1965.

By 1970, the headlights had gone from one on top of the other to side by side and the engine had increased from 429 cubic inches to a massive 472 cubic inches. The DeVille was offered as a full model range encompassing sedans, coupes, and convertibles. A total of 181,719 DeVilles of all types would roll off the assembly line in 1970, accounting for 76% of the total production—a feat never again accomplished by another Cadillac model.