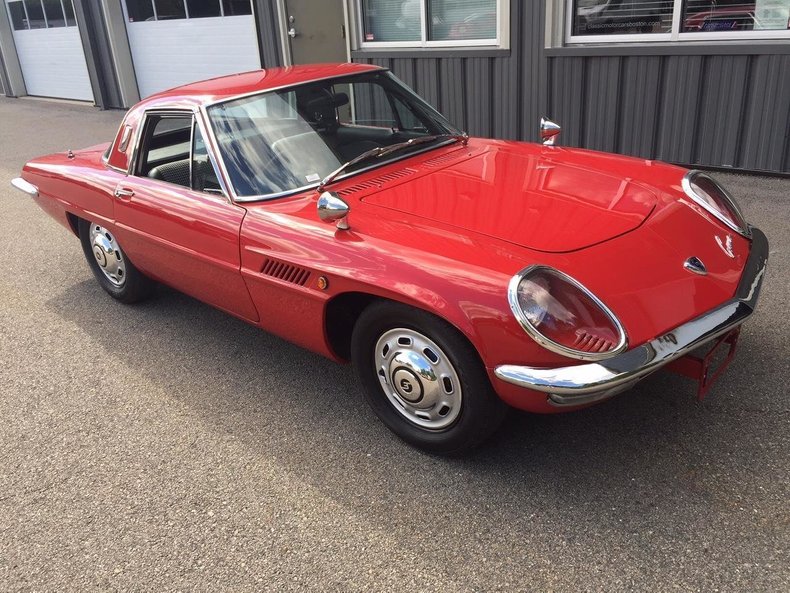 1 of 343 made, Matching Numbers, Complete Restoration

One of Just 343 Series I Cosmos

The rear-wheel-drive, two-seat Cosmo Sport made its debut at the 1964 Tokyo Motor Show resembling more spaceship than automobile – a sweeping roofline conveying a supersonic stance, with bumper-split taillights evoking scorching afterburners. The Cosmo was also the first production vehicle featuring a Wankel rotary engine. Mazda licensed the Wankel from Germany's NSU, and the Japanese company further developed the design, improving durability and reliability.

The first generation of Cosmo production is referred to as the Series I/L10A. Its two-rotor engine coaxed 110 hp from just 982 cc of displacement but with exceptional smoothness. Performance was reported to be brisk for the era, with 0-60 taking 8.2 seconds and a top speed of 115 mph possible.

This Cosmo was recently restored in its native Japan over about two years. Finished in a rare combination of red over black upholstery, and accented by houndstooth cloth inserts to the seats, both mechanicals and cosmetics were comprehensively attended to. The engine and transmission were overhauled by a former Mazda Group C mechanic, while the body and interior were refurbished with new paint, chrome, leather, rubber, and new/old stock parts where needed.

This Mazda Cosmo Sport, accompanied by photographs that document the restoration, is one of only 343 Series I examples and a car that helped define Mazda as a preeminent manufacturer of fun-loving sports cars.