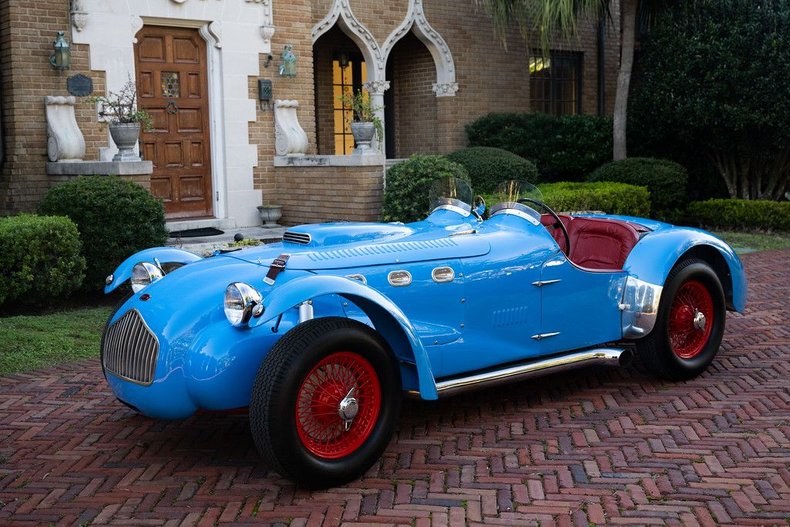 1 of 83, No Expense Spared Concours Restoration

Just out of 20 year collector ownership. Believed to be original Cadillac 331 V8. Raced in period by Elgin Holmes.

By 1950 Allard had sold 854 cars and was marketing the J2 and K2 roadsters, and the P2 sedan, in which he won the 1952 Monte Carlo Rally ahead of Stirling Moss, becoming the only man ever to win the event in a car of his own manufacture.

The most familiar Allard competition car was the J2X. A barebones racer, it had an aluminum two-seater body and Ford or Chrysler V-8 engines, ranging up to Cadillac's 220-bhp, 331-cid OHV V-8 – in a car that weighed 2,150 pounds. The rear axle was a De Dion setup and the front axle was a Leslie Bellamy design, split, with a transverse spring. Given the power-to-weight ratio, handling could be a handful and required an attentive driver.

Allard quoted J2X performance figures of 0-50 mph in 6.8 seconds, with a 16.7 second quarter-mile time and top speed around 120 mph, but tuned versions were certainly much faster, and dominated West Coast racing until the arrival of the Ferrari 340MM and 375MM in the mid-1950s. Full “Le Mans” options were offered, including windshield, top, wipers and headlights with stone guards, but most cars remained minimal competition racers.

This Allard J2X runs and drives as good as it looks and would make a great addition to any collection.