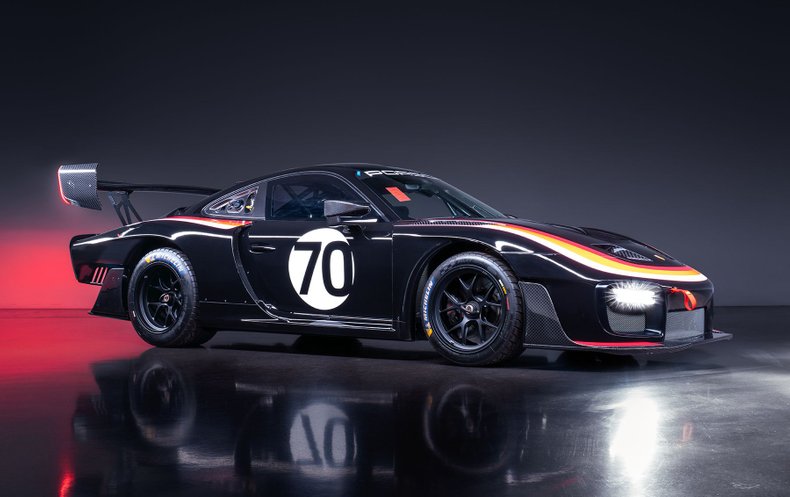 This is not a consignment vehicle. We own it. Inspections welcomed.

Officially unveiled in September 2018 at Rennsport Reunion VI at Laguna Seca, California, the 2019 Porsche 935 was immediately lauded as a stylistic, aerodynamic, and technological tour de force. The new car was based on the 911 GT2 RS mechanicals, and begins with a lightweight tub cloaked in carbon reinforced plastic bodywork. Its spectacular, modern aerodynamic shape and massive rear wing create downforce, cool brakes, and extract hot air, while unmistakably paying tribute to the Porsche 935/78 "Moby Dick."

For power, the 935 relies upon an uprated 700 hp, 3.8-liter twin-turbocharged, flat-six engine and solid mounted seven-speed Doppelkupplung (PDK) gearbox from the GT2 RS to drive an electronically adjustable, limited-slip differential optimized for the racetrack. Reaching 0-60 in 2.3 seconds, its top speed is 211 mph. Braking is accomplished through four-wheel, six-piston aluminum monobloc calipers, and 380/355 mm ventilated steel rotors.

Porsche built just 77 of the 935s. With delivered prices in the $1,000,000 range, applications to purchase a car were carefully evaluated, and the lucky recipients were hand selected. There was no configurator for the 935. Details and specifications were discussed directly with Porsche by telephone or email.

This car is no. 49 of 77, and was purchased new by a noted American Porsche collector and owner of some of Porsche's most important competition models – including an original RSR, 934, 934/5, and an original 935. It was specified in the dramatic black, red, orange, and pink livery of Ted Field's famous Interscope Racing team. Interscope enjoyed great success with the original 935, including an overall win at the 24 Hours of Daytona in 1979, piloted by Fields, Danny Ongais, and Hurley Haywood – the winningest driver in Daytona 24 Hour history. Today, the car remains in pristine, as-delivered condition, having never been raced or tracked. Even the tie-down transport lugs remain in place. The car retains its factory-placed warning stickers and protective wrappings, and is accompanied by a large pallet (and expensive option) of spares from Porsche, including BBS wheels, brake rotors, and cases of consumable parts.

Porsche created a true masterpiece with the 70th anniversary 935. Free from rules and encumbrances of road laws or racing series, its designers and engineers were free to create the finest pure race car possible. This is an extraordinarily rare opportunity to acquire a like-new, as-delivered example of what will most assuredly become a Porsche legend.