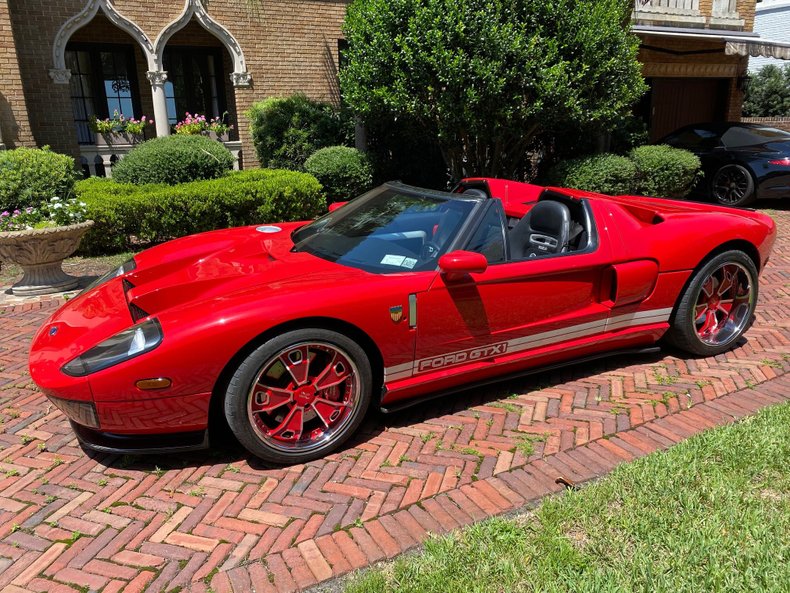 This is the second of about 30 custom roadster versions of the Ford GT coupe designed by Ford Engineer Kip Ewing and built by the Genaddi Design Group under license from Ford. It is the only GTX1 in red with racing stripe delete. Each GTX1 was custom built by Genaddi for a specific owner from an extensive list of options. No two are alike. This GTX1 is loaded up with $105,500 in Gennadi options and has had just two owners in its history with 10+ years under most recent ownership.

The idea for the Ford GTX1 Prototype was conceived by Ford Engineering and Design Supervisor Kip Ewing who was inspired by the 1966 Ford GT40 that was made into a roadster, named the GTX1, and won the 12 Hours of Sebring Race in 1966. Kip envisioned the GTX1 as the second phase of Ford GT, but obtaining approval to build the GTX1 was extremely difficult because the Ford GT was already a masterpiece and the production run was only going to be 2 years; however, the breathtaking design of the GTX1 enabled Kip to obtain approval to build a Prototype and he chose master coach builder Mark Gerisch of Genaddi Design Group to be the builder. The GTX1 Prototype was designed, developed and built by Ford Motor Company and Genaddi Design Group and introduced at the 2005 SEMA Show in Las Vegas, where Ford announced that consumers could own a GTX1 by purchasing a Ford GT and sending it to Genaddi for the Roadster Conversion. The GTX1's were very expensive to build and only around 30 were built.