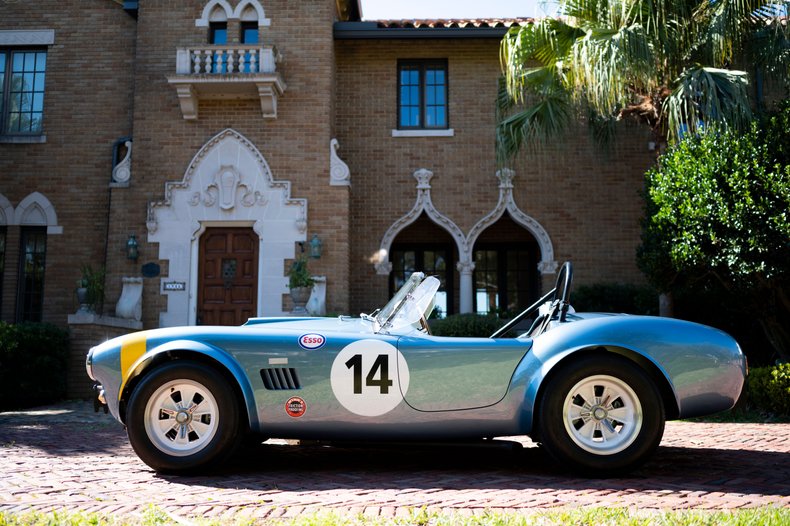 This CSX7000 Series 289 FIA is an authentic continuation of the Shelby Cobra 289 FIA race cars built and campaigned in the '60s. This beautiful Viking Blue 50th Anniversary example was built in 2015 with a Ford Racing 302 V8, Weber Carburetors, and a Tremec 5 Speed transmission. The dashboard is signed by Allen Grant, Bob Bondurant and Peter Brock. All original factory documents including invoice, bill of sale, build sheet, Shelby Vehicle Authenticity Certificate, and more. See photos for complete build configuration.

Carroll Shelby always envisioned putting American V8 power into a light weight European chassis. At the heart of the Cobra was a strong reliable powerplant that brought out the potential of the nimble little chassis. The small block 289 Ford motor powered the FIA Cobra roadsters that dominated the American road race scene. The small block V8 powerplant also powered the Daytona Coupe that won America's first and only world manufacturers championship in 1965.

The CSX 7000 suspension is essentially identical to that which underpinned the 289 Cobra through the mid-'60s. It is the same front and rear suspension that carried legends like Ken Miles, Dan Gurney, Bob Bondurant and Phil Hill into victory circle. Nimble and responsive, the rack and pinion steering offers functionality that reflects an earlier era, with no synthetic buffer between the driver and the machine.

This limited production Shelby CSX is in excellent condition and it runs and drives as good as it looks.