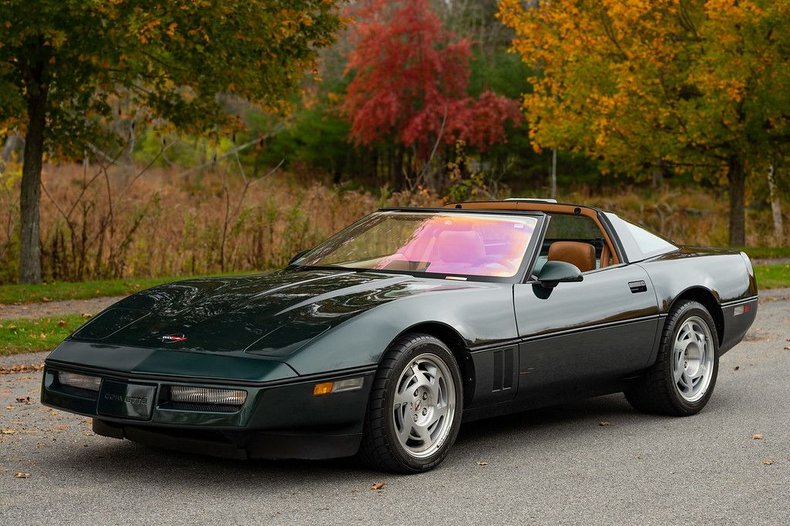 This vehicle is located in Massachusetts. We have it listed on consignment for a good friend/collector.

One of just 104 made in Polo Green Metallic, this 3 owner 1990 ZR-1 is in excellent condition and has been well maintained.

The Corvette ZR-1 is a rear-drive sports car powered by a 32-valve, 5.7-liter, port-fuel-injected V-8 engine with an aluminum block and aluminum heads. The engine was designed by GM's Group Lotus Division and built under contract by Mercury Marine in Oklahoma, a facility known for high-muscle aluminum engines.

Amenities include power windows, locks, and mirrors, as well as automatic climate control, cruise control, and an aftermarket Kenwood head unit with SiriusXM and Bluetooth connectivity. The removed Delco Bose Gold Series stereo with CD and cassette players is included in the sale.

From Car and Driver: "The engine's performance is best described as otherworldly. Its power just plain warps the mind. The ZR-1 has the ability to take you from 0 to 60 mph in 4.5 seconds and from a stop to 100 in 10.4 seconds. We also recorded a 0-to-150-mph time of a tick under half a minute. Top speed, for the adventurous, is a sizzling 175 miles per hour... behind the engine is a six-speed manual transmission that's as sweet as anything mechanical you're likely to lay a hand on... Zahnradfabrik Friedrichshafen AG, usually referred to simply as ZF, designed the six-speed transmission especially for the Corvette. The fully synchronized unit derives much of its slick operation from an internal-rail shift mechanism and a hydraulically actuated, 280mm-diameter pull-type clutch."

This ZR-1 runs and drives strong, and given the low miles would make a great addition to any collection.