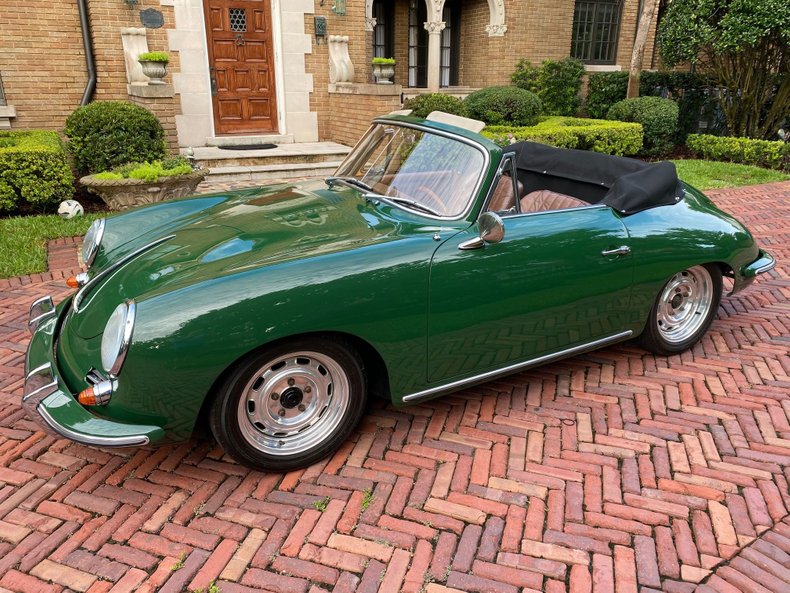 This 356SC was completed at Porsche's Zuffenhausen Works as a 1965 model-year SC Cabriolet. This car, chassis no. 162151, was the 14th to last 356 to roll off the production line and was essentially manufactured alongside the all-new 911 at the time. The car was finished as it appears today - in Irish Green, with Light Brown Leatherette, and is believed to have been delivered to the European market from new. The car was brought to the US in 1972 and purchased by the previous owner who commissioned mechanical and cosmetic attention as needed. In the early 1990s, the original engine was removed, and a period-correct 356SC unit was rebuilt at fitted, by noted 356 engine builder 'Maestro'. The car was later professionally repainted, in the original Irish Green color.

The car presents beautifully throughout, with great shine to the exterior paint and good fit and finish. The seats appear original and the new owner may want to replace the leatherette, though we prefer them as is. Fog lights are fitted in the front, and a newer black convertible top is fitted with a matching top boot available to cover it when down. The car runs on slightly wider wheels, giving it better road holding, though the original wheels and replacement chrome hubcaps come with the car, along with the original tool kit & jack, original steering wheel, Porsche issued Certificate of Authenticity and original owner's manuals, and a large box of maintenance and restoration documents.