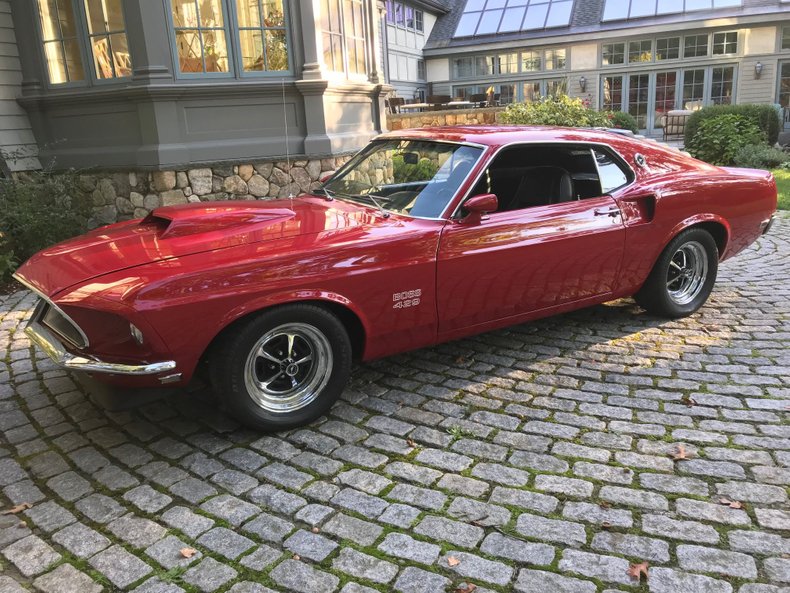 We took this incredible Boss 429 in on trade for a Ford GT from a serious Mustang collector. We commissioned a 5 hour inspection by noted Boss 429 expert Mick McKinnon of Vintage Snake Restoration, who believes the 32,000 miles to be original given the condition of the car, including the 100% original interior, original glass, original body panels, rolled fender lips, etc. This 1969 Ford Mustang BOSS 429 is KK #1791 and was the 590th unit produced.

Included with this Boss 429 are 2 original build sheets, original window sticker, Marti Report and a stack of maintenance, service and parts receipts detailing mechanical work including an engine and transmission rebuild, as well as disassembly and a professional repaint in 2005. Stock parts that come with car include the original shifter and smog equipment. Those parts have been replaced to maximize drivability and reliability.

This Boss 429 is listed in the Boss 429 Mustang World Registry and would be a wonderful addition to any serious collection.

Only offered for two years, 1969 (859 built) and 1970 (499 built), the Mustang BOSS 429 represents the extreme lengths taken by Ford to remain competitive in NASCAR stock car competition. Because the BOSS 429 twisted HEMI engine was several inches too wide to fit between the Mustang's stock shock towers, Ford sent partially constructed Mustangs from its Dearborn plant to Brighton, MI, subcontractor Kar Kraft for BOSS 429 installation. The completed street models homologated the engine for use in NASCAR competition (ironically, where they competed in Torino-bodied race cars).