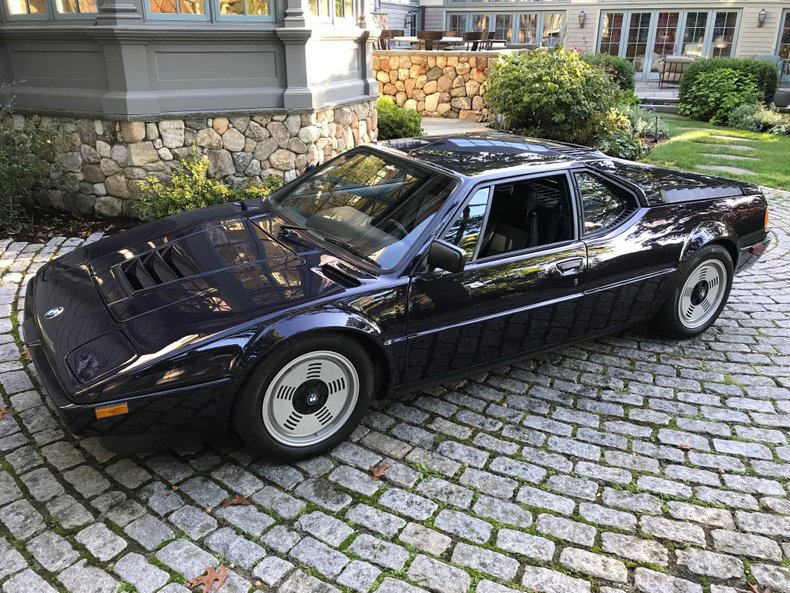 The BMW M1's existence originates from the need for a production based car for a proposed Group 5 'Silhouette Formula' to compete in the World Sports Car Championship. The mid-engined concept car was designed in-house by Frenchman Paul Bracq. Ex-racing driver Jochen Neerpasch was responsible for initiating this ambitious project which was intended to take on rivals Porsche and hopefully yield a victory at Le Mans.

Internally dubbed the E26, the M1's development was a cooperative effort with top Italian specialists. Lamborghini was initially contracted to build the car but Giorgetto Giugiaro's Ital Design ultimately took over the project. The coach assembly was performed at Ital Design featuring a fiberglass body built by composite specialist T. I. R. on a multi tubular space frame chassis supplied by chassis specialist Marchesi & C.

Assembled bodies were shipped to BMW's German partner Baur for the mechanical assembly, the last stop then being BMW Motorsports for final preparation and distribution. The twin-overhead-cam, four-valves-per-cylinder 3.5-liter six was all BMW with tweaks by the Motorsports division. A five-speed ZF transaxle was used to transmit power to the ground. Lamborghini's Gian Paolo Dallara was responsible for developing the suspension, which followed racing practice by using unequal-length wishbones at front and rear. The M1's wedge-shaped coachwork proved highly efficient aerodynamically, needing very little in the way of additional spoilers and wings, even in race configuration. The M1's interior was exceptionally well equipped for a sports car. It featured Recaro seats in leather with fabric inserts, air conditioning, electric windows, remotely operated door mirrors and heated rear screen.

First shown at the Paris Motor Show in 1978, the road-going version came with 277bhp and a top speed of 160mph. The abandonment of the Group 5 Silhouette Formula robbed the car of its raison d'être, but production nonetheless continued. An M1-only Procar Series was run at Grand Prix races in 1980 and '81 provided BMW Motorsport with a valuable showcase by way of consolation. Some 453 M1s were built thereby fulfilling racing homologation requirement that 400 be produced. Production ceased at 399 road cars and 54 Procars.

Imported into California when new, this M1 spent its life in Canada before recently returning to the U.S. This M1 has an exceptionally documented service history and benefits from a significant mechanical refurbishment. This M1 was cared for at a very high level and one drive will convince you of that. Not a squeak or rattle on bumpy roads, this M1 feels new. The car is accompanied by a thick stack of service and repair receipts detailing maintenance throughout its lifetime, its service manual, microfiche, owner's manual, original tool kit, restorer's guide, spare wheel, jack, safety kit and a Certification from BMW Germany.

The odometer reads 048,067 km (29k miles). Receipts show a costly engine rebuild at 70k km (42k miles). We do not have an explanation for the odometer reading. There are no service receipts to verify mileage progression from the 2nd to last longtime owner who owned the car from 1990 to 2008 (only parts receipts from 1990 and 1991). Given the condition, we are assuming he didn't drive it much. Regardless, we feel the mileage is somewhat irrelevant on this M1 given the level of attention it received, documented by a hundred or more service and repair receipts. We have had this M1 gone through top to bottom by a master BMW mechanic and there are no issues. We welcome Pre Purchase Inspections. This is an extremely solid, well sorted M1 in the best color.

This special M1 would make a wonderful addition to any collection.